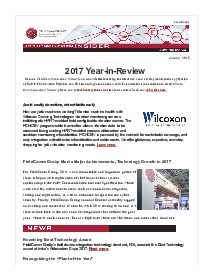 For FieldComm Group, 2017 was a remarkable and important period of time. It began with registration of the first-ever host system conforming to the HART Communication Protocol Specification. There were also key milestones in areas such as standards development, testing and registration, as well as enhanced integration and cyber security. Finally, FieldComm Group’s annual General Assembly capped an exciting and successful 12 months. With 2017 coming to an end, it’s time to look back at the news and developments that defined the past year. There is much to cover, but at a high level these are the issues and events that stand out:

Recognizing the “Plant of the Year”

As part of its effort to provide localized support in the world’s growing industrial regions, FieldComm Group established a position for a regional director in the Middle East.

In a significant development for HART technology, FieldComm Group registered the first ever host system conforming to the HART Communication Protocol Specification.

FieldComm Group and PROFIBUS/PROFINET International cooperated during 2017 to stage a series of “PlugFests” to validate the interoperability promise of FDI technology.

Regardless of Industrial Internet of Things (IIoT) initiatives, future architectures or newly available protocols, the value of intelligent field devices did not diminish during 2017.

Efforts to simplify the implementation and operation of FOUNDATION Fieldbus-based digital controls systems in the process industries continued to show progress during the previous year.

FieldComm Group, ODVA and PI (Profibus & Profinet International) joined together on a work project to achieve and promote an advanced physical layer for EtherNet/IP, HART-IP and PROFINET.

FieldComm Group announced the availability of testing and registration for FDI Device Packages and FDI Host Systems to the industry integration standard.

As devices, hosts, and architectures become more complex, assured adherence to standards at the protocol and information model level is a requirement for maximizing captured value.

FieldComm Group closed a successful year by releasing version 1.1 of the FDI Technical Specifications and version 1.2.1 of the FDI Development Tools.

FieldComm Group demonstrated how its open standards like FOUNDATION Fieldbus, HART, WirelessHART and FDI help enable the IIoT at the Smart Industry 2017 conference.

FieldComm Group participated in major industry tradeshows and user groups at every corner of the globe.